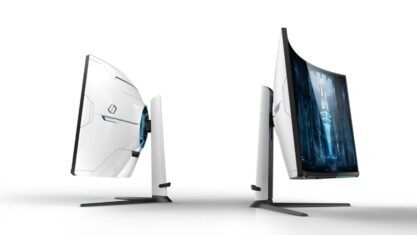 Days away from CES 2022, Samsung has announced the Odyssey Neo G8 4K curved monitor. The new display is a smaller, 32-inch version of the 49-inch Odyssey Neo G9 but retains that 1000R curvature.

While maintaining a similar design philosophy as the G9, the Odyssey Neo G8 provides 2,000 nits of peak brightness and quality display by utilizing a Quantum Mini-LED panel.

Additionally, the gaming monitor provides a boost in resolution from the G9. Samsung claims this is the first 4K monitor to provide 240Hz and a 1ms response time. The G9 offers the same refresh rate and response time. However, it runs on a WQHD panel, limiting the resolution. AMD’s FreeSync Premium Pro and NVidia’s G-Sync offer similar support, but this proves to be a significant innovative step from Samsung itself.

Having access to 240Hz should provide an exceptional gaming experience for players. A higher framerate provides smoother gameplay and reduces the chances of screen tearing, stuttering, or other visual setbacks. Of course, this requires a PC powerful enough to run a 4K resolution at a high framerate.

Samsung has yet to provide specifics on pricing or even when we can expect the monitor to ship. The Odyssey Neo G9 is available in Canada for $1,999, giving us a rough idea of how much the 32-inch display will cost.