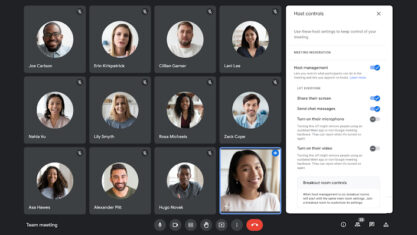 Google is introducing a new feature to its Meet video conferencing app that will allow moderators and hosts to disable one or more participants’ microphones and video streams and keep it that way until unlocked.

It’s similar to a child lock, where muted users won’t be able to turn on their mic or camera until you, the moderator of the meeting, manually give them permission. The new feature will be handy in education settings, giving professors complete control over when they want certain ‘disruptive’ students to participate. Additionally, when a host turns on an audio or video lock in the main meeting, it will also be applied to breakout rooms.

Google noted that if the host turns on the audio or video lock, participants using versions of the Android and iOS applications that do not support the new feature will be automatically ejected from the meeting. Whereas, if a participant attempts to join the meeting while the audio/video lock is enabled, and said participant is on an old version of the app, they’ll be prompted to update to the latest version of Meet.

Today, Google has started rolling out the new tool to Rapid Release domains (users under rapid release get updates as soon as they drop). It can take up to 15 days for the feature to be available for you. Further, beginning November 1st, Google will release the feature for users in the ‘Scheduled Release’ domains.