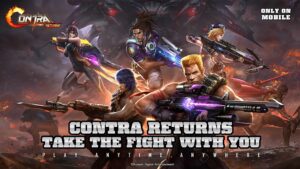 Konami’s classic run-and-gun series is getting a new game on mobile.

Officially titled Contra Returns, the game features signature Contra 2D sidescrolling that can be controlled via touch screen. It’s not a completely new game, though; it originally released in China way back in 2017.

Contra Returns was developed by Tencent’s TiMi, the studio best known for its work on mobile juggernauts Call of Duty Mobile and Honor of Kings,

However, only about five seconds of actual gameplay from Contra Returns was actually shown off in the announcement trailer, with the rest of the one-and-a-half minute reveal dedicated to live-action footage of two men cosplaying as Contra characters Bill Rizer and Lance Bean.

If you’re interested, you can find Chinese gameplay of the game on YouTube. Otherwise, we just have Konami’s official description to go off of, which explains that the game will offer “an authentic new take” on Contra will more than 200 levels and new game modes like One Live Mode.

Contra Returns is coming to iOS and Android in North America on July 26th, with pre-registration now open to receive in-game rewards at launch.