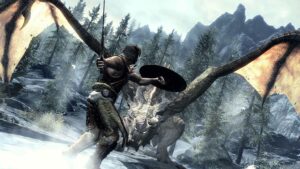 Bethesda Game Studios (BS) director Todd Howard is setting expectations straight regarding how much progress has been made on the developer’s next Elder Scrolls game.

Speaking to The Telegraph, Howard noted that, as expected, the “vast majority” of the BGS team is toiling away at Starfield, the studio’s first new IP in 25 years. The mysterious open-world sci-fi game was revealed in June 2018 and officially given a November 11th, 2022 release date and Xbox Series X/PC exclusivity earlier this month. The Elder Scrolls VI was revealed at the same time, although Bethesda has stressed that the focus is on Starfield releasing first.

Given that Starfield is still almost a year-and-a-half away, it remains to be seen when The Elder Scrolls VI will ever come out. Further, questions remain about whether the game will be an Xbox/PC exclusive like Starfield.

In the meantime, though, Bethesda parent company Xbox is planning for a holiday 2021 lineup that includes Halo Infinite and Forza Horizon 5. The publisher’s first Xbox/PC exclusive Bethesda game, Dishonored developer Arkane’s Redfall, will follow in summer 2022.

The post Bethesda’s Todd Howard says The Elder Scrolls VI is still in the ‘design phase’ appeared first on MobileSyrup.