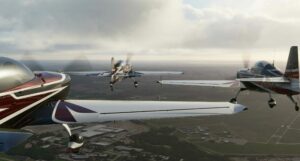 While earlier rumours indicated the Xbox Series X/S version of Microsoft’s Flight Simulator would appear during the Xbox/Bethesda E3 showcase, a leak regarding the title has appeared ahead of the big event.

First spotted by The Verge’s Tom Warren, GameStop Ireland posted the regional pricing for the game and the released date. GameStop has since removed the page from its website, but you can still view screenshots below.

during a press briefing ahead of its Xbox E3 event, Microsoft also showed off a trailer for Microsoft Flight Simulator running at 4K on Xbox Series X. The trailer will be shown on Sunday and ends with “landing on Xbox Series X|S” I think it’s safe to say it’s coming REAL soon pic.twitter.com/lshic95bMA

It’s surprising that Flight Simulator is coming to the current-gen Xbox consoles this quickly. Additionally, Xbox Game Pass Ultimate subscribers will be able to grab the game for free.

During a press event ahead of its upcoming E3 keynote, Microsoft showed off the trailer for Microsoft Flight Simulator running in 4K on the Xbox Series X.

Microsoft and Bethesda’s E3 showcase will take place on June 13th at 1pm ET. Other games that are rumoured to make it to the keynote include Halo: Infinite, Bethesda’s new IP, Starfield, and the new Fable title.