Apple Music might be what Spatial Audio needs to go mainstream 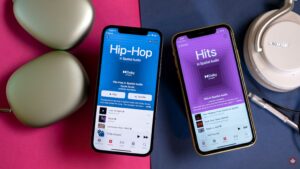 Apple Music has been hyping up its new Spatial Audio feature, and after spending time with it, MobileSyrup’s ageing pop-punk expert, Patrick O’Rourke, and Whalberg fanboy, Brad Bennett, have some initial thoughts on whether it’s really the future of music.

We decided to split this up similar to how MobileSyrup covered Xbox Cloud gaming’s iOS and PC beta, given sound quality is quite subjective and everyone hears things a little differently.

We also haven’t been able to test out every song yet, so if you’re an Apple Music listener who has found a really interesting Spatial Audio track, drop us a comment or tweet us at either ‘@Patrick_ORourke’ or ‘@TheBradFad.’

“I was expecting the sound to be moving and flying around my head when listening to songs with Spatial Audio,” Bennett.

Apple isn’t saying how many songs are available in Spatial Audio, with the company only stating that it’s in the thousands. For this story, we focused on songs available in Apple’s ‘Made for Spatial Audio‘ playlist in Apple Music.

It’s worth noting that Spatial Audio with Apple Music doesn’t currently work the same as the audio technology does with the Apple TV. For instance, while Spatial Audio with Apple Music offers a wider soundstage and a 3D effect, there’s no head-tracking that adjusts the sound placement as you turn your head. Apple says it has plans to bring the Apple Tv head-tracking feature to the platform this fall — likely alongside the release of iOS 15.

It’s also worth noting that Spatial Audio isn’t the same as the high-quality Apple Music Lossless Audio the tech giant has been touting that requires wired headphones to take full advantage of (it will eventually work on the HomePod mini).

With that out of the way, let’s get into it.

So far, I’ve tried Spatial Audio wirelessly through a pair of AirPods Max and wired via the Shure Aonic 50s.

My first reaction to the feature is that it’s a little underwhelming, but at the very least, Spatial Audio tracks always still sound pretty good. That said, I didn’t really notice any outstanding audio effects with the current selection Apple Music has available — that is until I listened to Diana Ross’ I’m Coming Out.

The audio mix in that song places the backing vocals further back in space so it really felt like there were people in the background singing and less like a lower volume version of Diana playing underneath the main portion of the song. 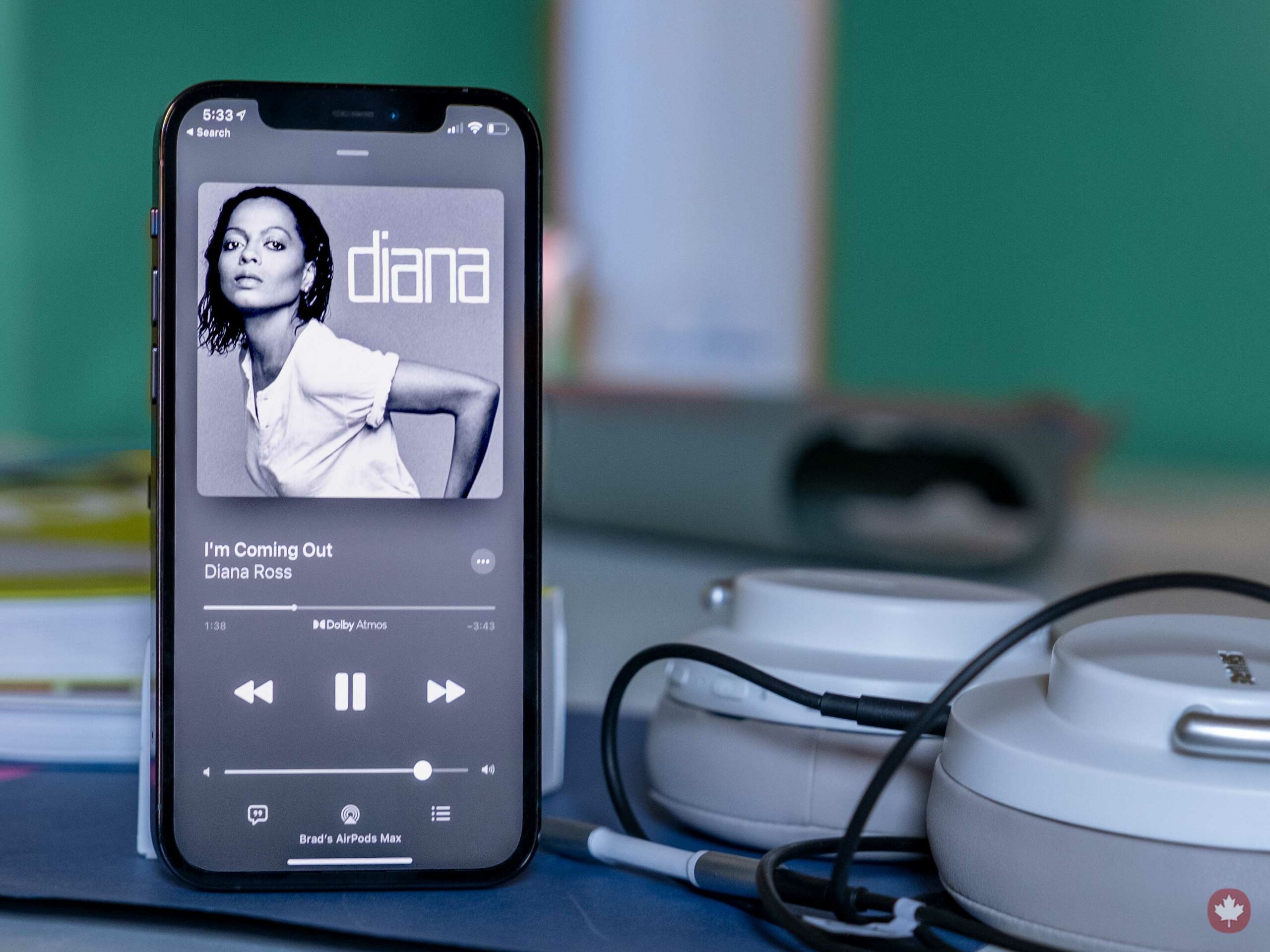 Other songs I tried were able to make some sounds come from slightly different directions, but beyond making the soundscape overall larger, nothing really seemed to take advantage of this new recording feature. For the most part, since you’re wearing headphones, the music still feels like it’s predominantly coming from the left and right channels.

With that in mind, the expanded soundscape effect shouldn’t be discredited since it’s one of the things I notice the most when using high-end wired headphones. Further, the fact that Apple was able to create software to bring that effect to more people is no small feat.

What I keep thinking about as I test Spatial Audio is the first song I ever listened to with headphones that truly took advantage of stereo separation, the somewhat corny track, Dirty Dancing by New Kids on the Block. The song has this really fun audio glitch effect that spreads from one ear to another and back that sounds really cool. It’s almost like the music is moving through your head, in a sense.

Likely because of this experience, I was expecting the sound to be moving and flying around my head when listening to songs with Spatial Audio.

Overall, I’m pretty excited to see what musicians can do to take advantage of Spatial Audio. For instance, a duet in Spatial Audio could do some cool things with call and response or maybe the New Kids on the Block will come back to show us all how it’s done. For now, I guess we need to wait for the music industry to catch up and master this new mixing tech.

I only hear it with newer songs

I’ve tried Spatial Audio on Amazon Prime music in the past and wasn’t impressed with the results. In fact, I’d go so far as to say I couldn’t really hear the difference.

Given how much Apple has been hyping Spatial Audio on Apple Music, I had relatively high expectations for the technology’s introduction to the streaming service. Similar to Brad, I found that Spatial Audio can sometimes be amazing but that it’s really hit and miss.

For example, Taylor Swift’s Cardigan sounds great pumping through the AirPods Max. I can really hear the separation in the backing instrumentals, and the sweeping soundscape genuinely feels three-dimensional.

“While there’s definitely a lot of promise with Apple’s Spatial audio, it really does seem to work better with some tracks than others.”

Good 4 u, Olivia Rodrigo’s absolute banger of a track sounds incredible in Spatial Audio. In fact, it actually makes the song sound better, revealing different audio cues and backing tracks I hadn’t heard before (and I’ve listened to this song a lot over the last few weeks).

On the other hand, Blink 182’s What’s My Age Again sounds like a muddy mess of pop-punk power cords, with Mark Hoppus’ iconic vocal delivery subdued to such a level that it’s almost unrecognizable. I experienced a similar reaction to Fall Out Boy’s swirling Sugar We’re Going Down. While the track doesn’t sound worse with Spatial Audio, it definitely doesn’t add anything to it either. 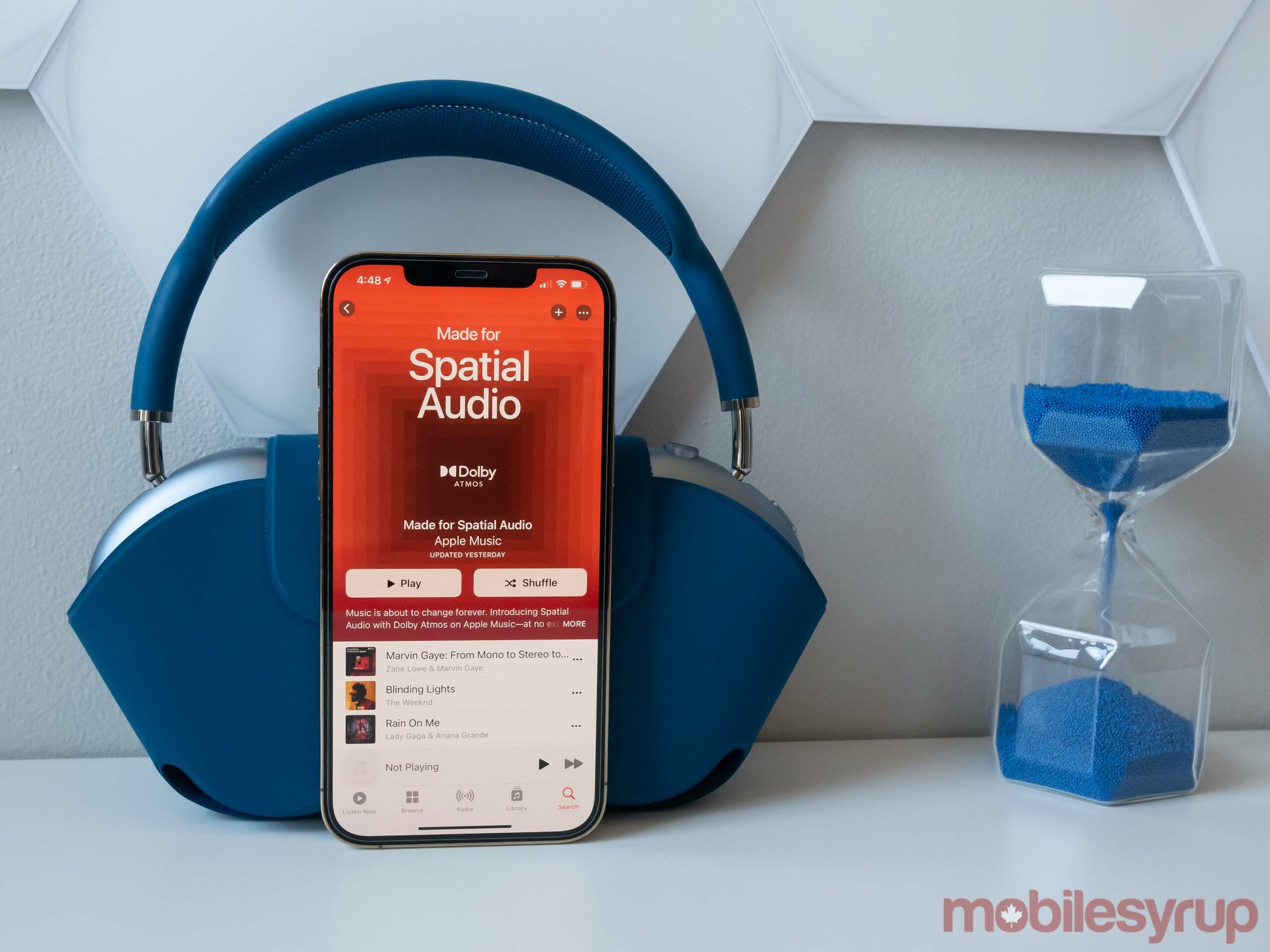 There’s a possibility the technology just isn’t suited to the sometimes painful simplicity of pop-punk, especially given how genuinely cool Kacey Musgrave’s Space Cowboy and Billie Eilish’s Therefore I Am sound with Spatial Audio.

At least to some extent, I also feel like older songs don’t sound as good in Apple’s take on Spatial Audio, which could have something to do with more modern recording techniques working better with the audio technology.

However, Counting Crows August and Everything After — a song my inner-Gen X loves — sounds stellar in Spatial Audio, so maybe there isn’t any truth to my theory.

In the end, thile there’s definitely a lot of promise with Apple’s Spatial audio, it really does seem to work better with some tracks than others.

The post Apple Music might be what Spatial Audio needs to go mainstream appeared first on MobileSyrup.