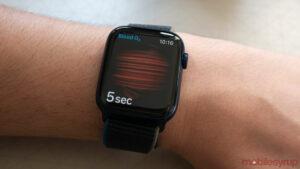 Now, according to a report from The Telegraph, the next-gen Apple Watch might have a blood sugar/blood glucose monitoring functionality.

The news comes as a U.K. health tech firm, Rockley Photonics, recently confirmed in a Securities and Exchange (SEC) filing that Apple has been the company’s most important and largest client for the past two years and that the two giants have a deal to continue developing future products. Rumours regarding Apple integrating blood glucose calculating mechanism in its smartwatch have circulated for a while now, but Rockley’s SEC filing adds weight to the claims.

Founded in 1988, Rockley develops sensors that can track blood glucose, blood pressure and blood alcohol levels, hinting that one or more of these features could end up in the next Apple Watch. Though Apple does sell third-party blood glucose monitors in its stores, having the feature built into its watch would be a significant move for the tech giant.

If the feature makes its way to the Apple Watch, battery life and cost will likely be a significant consideration for the company. Even though the technology is reportedly ready, it might be a year or two until we see a blood glucose monitoring feature incorporated in the wearable.

The post Next-gen Apple Watch might be able to calculate your blood glucose levels appeared first on MobileSyrup.