Is in-car navigation really worth it in the electric vehicle age? 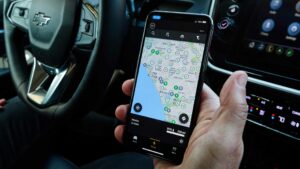 Ford, Volkswagen, Volvo, and pretty much every other automaker are also doing this, but every time I test out a new EV, I never really use them.

Before I get too far down this rabbit hole, I’ll say that I’m sure older people who are familiar with in-car navigation systems will use these features, but to me, they always seem like a less effective version of Google Maps.

Just imagine you’re in your car, and it’s running low on battery, so you want to find the closest charger. Which app do you think is more likely to surface the closest charger? An automaker’s janky system or Google Maps? The answer is always Google, simply because EV charging companies know they need to put their charger locations in Google Maps because that’s where the audience is looking for them. On the flip side, automakers are working hard to partner with EV charging companies, not the other way around.

“…if car makers really want to be competitive and provide features that users actually want, they should pay more attention to how people interact with their phones and make their vehicles act similarly.”

Sure, the ability to pay for a charge from various charger providers in one app is convenient. Still, if an automaker doesn’t partner with all EV charging companies, its navigation will likely have blind spots that users need to make up for with other apps on their phones anyway. In my experience, most third-party apps work better than weird ones made by automakers.

In the case of GM, which has promised that it will implement Google’s Android Automotive as the backbone of its infotainment systems, it seems like a weird waste of time to add a feature like this if all of its cars will come with Google Maps built-in by default anyways.

I understand that automakers employ thousands of people devoted to developing these features, but if car makers really want to be competitive and provide features that users actually want, they should pay more attention to how people interact with their phones and make their vehicles act similarly.

Porsche recently stated that it knows that its in-car infotainment and features lag behind modern smartphones, and more car companies need to take notice of this honest approach — it really feels like most automotive manufacturers are wildly out of touch when it comes to infotainment tech.

All of this is to say that EV charging is still a mess and while some automakers are trying to fix it, most still have a long way to go.

The post Is in-car navigation really worth it in the electric vehicle age? appeared first on MobileSyrup.