The Walking Dead: Survivors launching on mobile on April 12 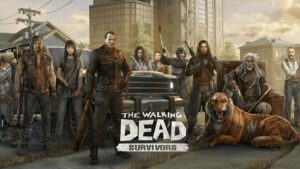 Game publisher Elex has announced that its The Walking Dead: Survivors game will launch on mobile on April 12th.

In Survivors, players build their own towns and defend them from walkers and other players. To do that, you play as more than 80 characters, including series veterans like Rick, Glen, Maggie and Herschel, as well as new, original figures created exclusively for the game.

Each character has its own unique traits, such as Rick (focused on fighting walkers and has damage-boosting skills), Maggie (increase production rate and speeds) and Herschel (a medic to increase healing speed, increase hospital capacity and reduce healing cost).

With these characters, you’ll need to explore areas, gather supplies, recruit new characters and more. Additionally, players can form ‘Clans’ to collectively build across the region to strengthen their forces against the villainous Negan.

The game will be free-to-play with in-app purchases. It’s unclear how much these will cost or what, exactly, can be acquired with them.

Pre-registration is now available on the Google Play Store.

The post The Walking Dead: Survivors launching on mobile on April 12 appeared first on MobileSyrup.