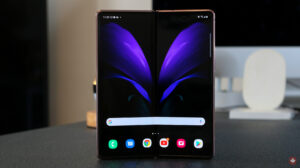 The latest leaks regarding Samsung’s Galaxy Z Fold 3 indicate that the foldable smartphone might feature one notable downgrade compared to its predecessor.

According to leaker @chunvn8888, the Z Fold 3 will include 7.7-inch inner display and a 5.4-inch cover screen. This is a step down from the 6.23-inch display featured in last year’s Z Fold 2.

Except the Z Fold3 outer screen size which I haven’t heard just yet, rest are match perfectly with what I heard and leaked (refering to the Z phones, and I haven’t heard anything about OPPO/vivo foldable phones) pic.twitter.com/na9lbbtzs8

That said, the handset’s cover screen will offer the same 25:9 aspect ratio and a 2,260 x 816-pixel resolution as the predecessor as well. It’s unclear what this will look like on the company’s upcoming device. Additionally, it’s unknown if either display features a 120Hz refresh rate, but some rumours indicate it will.

The Z Fold 3 will also reportedly include a Snapdragon 888 processor, and somehow, some sort of form of resistance despite being a foldable device.

Unlike previous years, Samsung might have new competition in the foldable smartphone market, with company’s like Xiaomi, Vivo and Oppo launching folding handsets this year. It’s worth noting that in Canada Samsung’s only competition might be TCL given the aforementioned Chinese companies don’t officially release their devices here.

It’s also worth noting that it’s important to approach this rumour with an air of skepticism. @chunvn888 isn’t a well-known leaker and display analyst Ross Young has previously indicated that the Z Fold 3 will feature a 6.21-inch cover screen.

Samsung will reportedly launch its foldable in the third quarter of this year alongside the Z Flip 3.