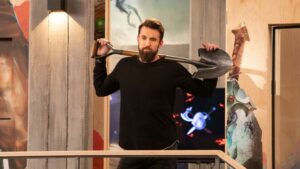 Before Season two of Mythic Quest drops on Apple TV+, the TV show is getting a special bonus episode on April 16th.

This is the series’ second bonus episode and focuses on the characters coming back to the office for the company’s annual ‘Everlight’ party after working from home during the COVID-19 pandemic. The first Mythic Quest bonus episode was also related to COVID-19 and what it was like for the team to work from home.

The new bonus episode is also called ‘Everlight’ after the name of the party. Anthony Hopkins will also voice a character in the episode.

Mythic Quest’s season two premiere kicks off on May 7th and follows the team as they work on a new expansion for their game.