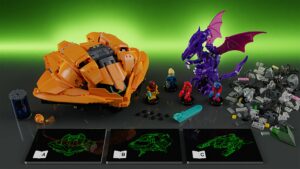 Nintendo’s beloved Metroid series might get the Lego treatment thanks to dedicated fans.

On the Lego Ideas site, builders are encouraged to submit concepts for Lego sets that the Danish toy company can ultimately turn into commercial products.

Recently, user L-DI-EGO posted an Idea for a “Metroid: Samus Aran’s Gunship” set, which includes the titular bounty hunter, her spaceship and the villainous Ridley.

In order for an Idea to actually be considered by Lego, it needs to garner at least 10,000 votes from users, and now, L-DI-EGO’s set has officially surpassed that milestone.

Of course, this isn’t confirmation that Lego will indeed turn “Metroid: Samus Aran’s Gunship” into an actual set, but it’s a promising first step.

It should be noted that Lego has an existing partnership with Nintendo, the owner of Metroid, on a set based on the Japanese gaming giant’s Mario franchise.

On top of that, 2021 marks the 25th anniversary of Metroid, as the very first entry in the iconic franchise debuted in Japan on the Famicom in August 1986. It’s possible that Nintendo might intend to commemorate the occasion with some themed merchandise.

In any case, Metroid fans are undoubtedly desperate for anything to come out of the franchise, outside of Samus and Ridley in Super Smash Bros. Ultimate. The last entry in the series was the 2017 3DS title Samus Returns, which, while well-received, was a remake. The year before that saw the release of Federation Force, a co-op shooter that received a mixed response at best, while the last proper mainline title was 2010’s polarizing Metroid: Other M.

Meanwhile, development on Metroid Prime 4 was restarted in early 2019 due to Nintendo not being satisfied with how the game was shaping up. Original Metroid Prime developer Retro is now working on the game, which hasn’t been seen since. Likewise, recurring rumours of a Prime trilogy remaster for Switch have yet to pan out.

All of that is to say that Metroid needs a little love, Nintendo, and a Lego set isn’t a bad way to start.