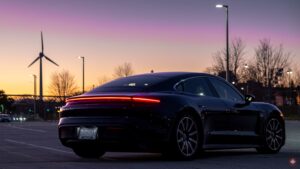 Porsche has removed some of the horses inside the Taycan, but in doing so, it also dropped the price by roughly $20,000, so this news is likely to excite some people.

The new model is simply called the Tayan, meaning it won’t have the 4S or Turbo badge like the more expensive versions.

This lower price does come with some downsides. It’s now only a rear-wheel-drive car, unlike the regular all-wheel-drive set up in the other trims. That said, losing the extra weight of the front motor might benefit the car to help offset the loss of power.

Porsche is offering this trim with both of its battery sizes — 79.2 kWh or 93.4 kWh. This puts the estimated range for these batteries at 431 and 484 kilometres, respectively. The regular Taycan 4S can be outfitted with the same battery packs and gets an average range of 321 km, but it has faster acceleration and top speed.

This is an interesting tradeoff that I’m glad Porsche decided to make. Making the car lighter can make it cheaper while also adding more range, which is something I think a lot of drivers are going to be more excited about compared to the over-the-top acceleration and torque of the original Taycan 4S and Turbo.

The new base model Taycan is slated for release in March of 2021, and MobileSyrup has reached out to learn about the specific Canadian pricing.

If you’re interested in learning more about the Taycan, check out our full review.