The black and slate iPhone 5s of your dreams almost existed 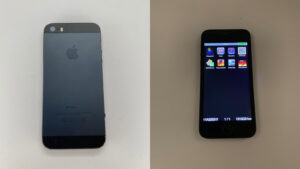 The iPhone 5s launched way back in 2013 and features a 4-inch 640 x 1136 pixel display, Apple’s now ancient A7 processor and a physical Touch ID button. The ‘S year’ device also featured a five-element camera with an f/2.2 aperture, a 15 percent larger camera sensor and slow-motion video capture at 120 frames per second.

Additionally it was manufactured in December of 2012, months after the 5 was released pic.twitter.com/qmKBxCuih7

While it’s not that unusual for Apple to keep some colours exclusive to a specific upgrade cycle, DongleBookPro says that Apple may have made this decision to try to keep the smartphone under wraps during development. This makes sense because unless you look closely at the device, the iPhone 5s looks exactly like the iPhone 5 at first glance.

It seems Black and Slate was entirely phased out following the release of the iPhone 5s, with ‘Space Gray’ taking over and still being offered to this day in the iPhone 12 series.

Though Black and Slate is a great-looking colour, back in the early 2010s there were some complaints that the hue was very susceptible to scratches and scuffs. This could have played a role in Apple’s decision to discontinue the colour.

Though the iPhone 5s was the last squared-off iPhone we’d see for several years, the design eventually returned with the iPad (2018) and last year’s iPhone 12 series. Given Black and Slate is one of my favourite iPhone colours, I’d really like to see it makes a return to Apple’s iPhone line at some point.

The post The black and slate iPhone 5s of your dreams almost existed appeared first on MobileSyrup.