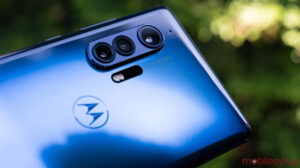 The previously leaked device has now been spotted in real-life images. The handset, codenamed Nio, looks similar to the Moto G 5G Plus. It sports dual hole-punch cameras on the front with a rear-facing quad-shooter setup, and according to the images, features a 64-megapixel primary sensor and ‘Audio Zoom.’

Further, according to the tipster from Digital Chat Station, the smartphone will be called Motorola Edge S. It will also reportedly be the first phone to feature an all-new Snapdragon 800-series chip.

A previous rumour indicates that the Edge S will sport 8GB of RAM, 256GB of storage, Android 11 and a 5,000mAh battery. Other rumoured specs include a 6.6-inch Full HD+ display with a 2,520 x 1,080 pixel resolution, a 64-megapixel primary shooter, a 16-megapixel wide-angle camera and a 2-megapixel depth sensor.

It’s unclear when Motorola will launch the Edge S, but last year the Edge and Edge Plus were revealed back in April, so we might see this new device around then.