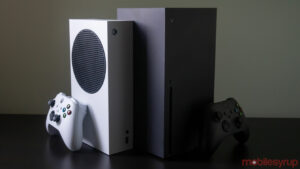 EB Games Canada has confirmed that it will have more Xbox Series X and S units available for purchase on Thursday, January 21st at 11am ET.

Specifically, this restock will be for Xbox All Access, Microsoft’s Xbox console financing program that’s exclusive to EB Games in Canada.

Financing is provided by RBC and has a 0 percent APR for 24 months. In addition to an Xbox console, All Access includes 24 months of Xbox Game Pass Ultimate. This gives you access to Game Pass on Xbox, Android and PC, as well as Xbox Live Gold and the EA Play subscription service.

Given that the Series X and S are quite popular, they’ll likely sell out shortly after going live. Therefore, you’ll want to be ready on EBGames.ca a bit before 11am ET.

For more on the new consoles, check out our Series X review our Series S review.

The post EB Games will have more Xbox Series X/S on January 21 via All Access appeared first on MobileSyrup.