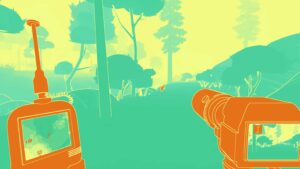 Created by a small international team of developers, which includes Montreal-based artist Pol Clarissou, Nuts tasks players with monitoring the bizarre movements of squirrels in the depts of Melmoth Forest to find up what the critters are up to.

In terms of gameplay, you’ll have to determine the optimal layout of your equipment through trial and error, then analyze your captured footage to solve the mysteries of the squirrels.