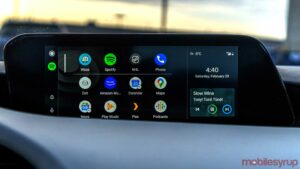 It looks like the next version of Android Auto will make it possible for people to set custom wallpapers and shortcuts.

This update is going to come in Android Auto 6.0 according to XDA Developers, but it’s unclear if users will be able to set their own wallpapers or if they can upload their own images. There appear to be 18 images to choose from. You can see 12 of them in Mishaal Rahman’s tweet thread and the other six on the XDA Developers website.

All of the wallpapers that are preloaded into the app are pretty simple images with larger blocks of colours instead of being extremely detailed. Therefore they shouldn’t be overly distracting on the road.

On top of the new wallpapers, XDA found that there’s a new ‘Shortcut’ feature that’s going to allow people to set shortcuts to call people or trigger a Google Assistant action. An action could be something like asking Google to navigate to a specific place at the touch of a button or asking it to broadcast a message telling people at your house that you’re on your way home.

These shortcuts show up as apps on the Android Auto home screen so you can easily trigger them as you’re driving.

There’s no mention as to when this update might drop so we’ll just have to wait.