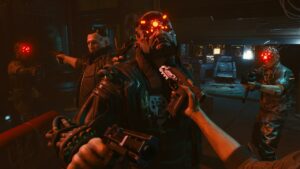 CD Projekt has released a new video addressing some of the controversies that have surrounded Cyberpunk 2077.

In a five-minute video posted to the official Cyberpunk 2077 social media accounts, Marcin Iwiński, CD Projekt’s co-founder, offered “a personal explanation of what the days leading up to the launch of Cyberpunk 2077 looked like.”

The company says it prioritized PC over consoles

Iwiński opened his message by apologizing for the broken state in which the console versions of Cyberpunk 2077 launched in on December 10th.

“Based on [our] legacy of genuine and honest communication, you’ve trusted us and pre-ordered our game, and despite good reviews on PC, the console version of Cyberpunk 2077 did not meet the quality standard we wanted it to meet,” said Iwiński. “I, and the entire leadership team, are deeply sorry for this, and this video is me publicly owning up to that.”

He asked that gamers don’t blame CD Projekt Red, the development team behind Cyberpunk 2077, for these issues, as they are “incredibly talented and hardworking” and it was “[leadership’s] call to release the game” in the state it was in.

Iwiński went on to try to explain why the game suffered so many technical issues on consoles.

“Cyberpunk 2077 is huge in scope. And I’m not only talking about quests or things you see at first glance, I’m talking about a multitude of custom objects, interacting systems and mechanics,” he said.

“In the game, everything is not stretched out over a flat terrain where we can make things less taxing hardware-wise, but condensed in one big city and in a relatively loading-free environment. On its own this is a challenge, but we made it even harder for ourselves by wanting to make the game look epic on PCs and then adjusting it to consoles — especially old-gens.”

However, he noted that the team “underestimated” how difficult this task actually was.

“To give you a concrete example, and the main culprit, we had to constantly improve our in-game streaming system for old-gen consoles. Streaming is responsible for ‘feeding’ the engine with what you see on screen, as well as the game mechanics. And since the city is so packed and the disc bandwidth of old-gens is what it is, it constantly challenged us. Every change and improvement needed to be tested and, as it turned out, our testing did not show a big part of the issues.”

This lead into the first week of December, when reviewers were only sent out PC copies of the game over a week before release. This made it impossible for either the media or consumers to properly gauge what state the game was in on last-gen hardware. According to Iwiński, the company’s decision to withhold last-gen review copies until launch wasn’t to mislead consumers, but simply because the team was “fighting for quality on old-gen consoles till the very last moment.”

He noted that these development issues were compounded by the unforeseen challenges surrounding remote development amid the COVID-19 pandemic.

With respect to fixing the game, Iwiński noted that three hotfixes have already been issued, while the next major update is set to come “within 10 days” from now. “Please expect bigger and smaller patches on a regular basis,” he added.

Additionally, Iwiński detailed how the game’s free post-launch content rollout has been pushed back amid the company’s focus on improving the game.

According to Iwiński, the initial plan was to offer free downloadable content (DLC) “just after the release.” He didn’t elaborate on what these would be, but he likened this to what the company did with its last game, The Witcher 3, which received sixteen pieces of free DLC, ranging from new armour, weapons and contracts. Presumably, Cyberpunk 2077 will be given a similar treatment.

Finally, Iwiński noted that the previously confirmed free PlayStation 5 and Xbox Series X/S update will now drop in the latter half of 2021, later than originally planned.

He ended the video by saying the company will share more on all of its Cyberpunk 2077-related post-launch plans in the coming weeks.

It’s worth noting, however, that Iwiński didn’t address one of the other major Cyberpunk 2077 controversies — the “crunching” (or prolonged overtime) of CD Projekt Red developers. Ahead of launch, reports came out that CD Projekt Red was implementing mandatory overtime which led to six-day weeks and, in at least one case, 100-hour weeks, for developers.

Instead, the company acknowledged this issue in a new FAQ pertaining to ongoing Cyberpunk 2077 support. “The team is working to bring relevant fixes to the game without any obligatory overtime. Avoiding crunch on all of our future projects is one of our top priorities,” wrote the company.

In the FAQ, the company also said it doesn’t yet have a timeline for when the game will return to the PlayStation Store, simply saying it’s continuing to work with Sony to fix the game before relisting it. To that point, the company also said it sent out its first wave of reimbursements related to its ‘Help Me Refund’ program for the game. The initiative is “progressing according to plan,” writes CD Projekt.