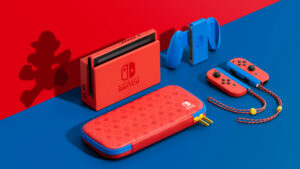 The special edition Switch bundle, modelled after the colours of Mario’s iconic outfit, features red Joy-Cons with blue trim, a red dock and Switch console and a blue Joy-Con grip. The unique-looking package also includes a red and blue carrying case with Mario clothing plastered across it in an eye-catching design, and red and white Joy-Con straps.

Despite being critically acclaimed and generally a great but very frustrating game (seriously, those later levels are so hard), Super Mario 3D World never really received the attention it deserved since it was originally released back in 2013 for Nintendo’s ill-fated Wii U.

One of the game’s biggest draws is that it features an excellent local co-op for up to four players. This new Switch version of Super Mario 3D World includes several new stages that are part of its Bowser’s Fury expansion.