Netflix offers ‘sneak peek’ at 27 of its biggest 2021 movies 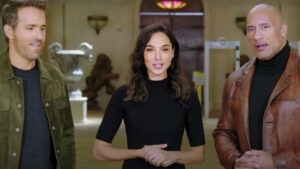 Netflix has revealed a sizzle reel trailer containing footage from 27 of its original films releasing this year.

2021 = a new movie EVERY WEEK on Netflix. Here’s a sneak peek at 27 of the biggest, brightest, fastest, funniest, feel-good, feel-everything films and stars coming to Netflix this year pic.twitter.com/iCr1ZPrc7W

Some of the films featured include action-comedy Red Notice with Dwayne “The Rock” Johnson, Gal Gadot and Vancouver’s own Ryan Reynolds; the third and final installments in the To All the Boys and Kissing Booth series, political satire Don’t Look Up with Leonardo DiCaprio and Jennifer Lawrence; the Idris Elba/Regina King-led Western The Harder They Fall and zombie thriller Army of the Dead starring Dave Bautista.

As it stands, none of these films have specific release dates. Overall, Netflix has 71 films set to release this year, per Variety, and the streamer says at least one will drop every week.

It’s worth noting, however, that this number could very well increase over the year should Netflix acquire any films. Last year, several studios sold their films to Netflix amid the COVID-19 pandemic, including the Kumail Nanjiani-Issa Rae romantic-comedy The Lovebirds, Aaron Sorkin’s The Trial of the Chicago 7 and the Millie Bobby Brown-led Enola Holmes.

With the 2021 theatrical landscape looking uncertain (especially as studios like Warner Bros. bring their films to streaming services), it’s quite possible that a slew of additional films will be sold to Netflix and release throughout the year.

The post Netflix offers ‘sneak peek’ at 27 of its biggest 2021 movies appeared first on MobileSyrup.