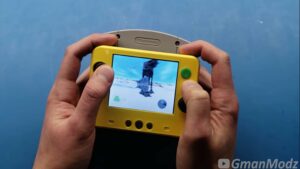 If you’ve ever wondered what a miniature Nintendo 64 would look like, one modder’s got you covered.

In a recent video, YouTuber GmanModz explained how he took an actual N64 and made it into a functional small handheld.

GmanModz says the N64 was cut, soldered and modded to fit into a heat-resistant plastic package. He then took a 3.5-inch screen and speaker and applied various buttons, including the joysticks from the Nintendo Switch’s Joy-Cons. Finally, he added a cartridge slot for the actual N64 games.

With all that said, GmanModz noted that some concessions had to be made in the process, noting “the battery life sucks” (coming in at about 1.5 hours) and “it’s uncomfortable to hold.”

Ultimately, though, it’s still a really neat project, and, as he notes, “It fits in my pocket — does your N64?”

Check out GmanModz’s full video below: