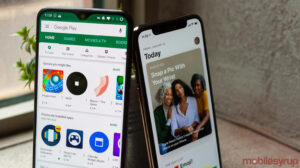 The firm notes that this represents a 34.5 percent year-over-year growth from December 25th, 2019. The majority of the holiday spending was on mobile games, which increased by 27 percent from Christmas 2019 to $295.6 million USD (about $377 million CAD).

Outside of games, entertainment apps continued to be the highest-earning source of revenue on both the App Store and Google Play. TikTok was the top non-gaming app in terms of consumer spending, generating $4.7 million USD (about $6 million CAD) on Christmas.

Breaking it down further, Sensor Tower reports that the App Store accounted for 68.4 percent of total Christmas spending (up 35.2 percent year-over-year), with Google Play bringing in the rest.

To put the Christmas spending figures into context, though, December 25th app store revenue still only accounted for just 4.5 percent of December’s total spending, which has so far hit about $9 billion USD (about $11.5 billion CAD) globally.

Collectively, Sensor Tower notes that the App Store and Play Store have generated more than $100 billion USD (about $127.6 billion CAD) in 2020 to date.