What do you think of the PS5’s new user interface? 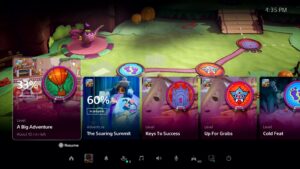 Sony has shown off the revamped user interface for its next-generation console, the PlayStation 5.

You can check out a detailed look at the UI in a new 11-minute episode of Sony’s State of Play video found below.

The new user interface offers a tile-based homepage that features games and apps in a layout similar to the PS4’s, but there are now two sections that separate games and media.

Also, there’s a new ‘Control Center’ that users can navigate to by pressing the PS button on the new DualSense controller. The Control Center offers the ability to perform system tasks, view online friends, see the download status of games, and managing your controller without leaving the game you’re in.

Additionally, the Control Center lets users access the PlayStation’s ‘Activities’ feature. The Control Center is viewable through a set of cards that users can access to get help with trophies, finish missions and learn non-spoiler-related information about the game you’re playing.

Activities also let users join PS parties, as well as use the Share Screen feature and easily access the game your friends invited you to play. It’s worth noting that you no longer need to leave the game you’re playing while watching a ‘Share Screen’ thanks to new picture-in-picture functionality.

You’re also able to save screenshots or video clips, like on PS4, but the new console offers editing options when you open the specific media. Additionally, you’re can now capture video in 4K resolution on the PS5.

Further, the PlayStation Store is no longer a standalone app and is instead integrated into the PS5 dashboard for seamless browsing. There’s also an ‘Explore’ tab with a social media-like news feed.

There’s a lot to unpack regarding the PS5’s UI, and you can learn more in the video or here.

What do you think about the new UI? Personally, I’m a fan, and I can’t wait for the upcoming changes. Let us know your thoughts in the comments below.

The post What do you think of the PS5’s new user interface? appeared first on MobileSyrup.