Bethesda’s The Elder Scrolls 6 could be an Xbox and PC exclusive, according to Phil Spencer 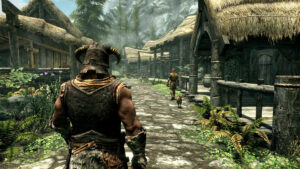 One of the most significant questions looming over Microsoft’s massive $7.5 billion acquisition of ZeniMax, the parent company of notable game studios like Bethesda and Id Software, is whether future titles under the publishers banner will be exclusive to the Xbox Series X/S and PC.

In an interview with Kotaku, Phil Spencer, the head of all things Xbox, indicated Bethesda’s Elder Scrolls 6 could be exclusive to the Xbox Series X, Series S and PC.

“Is it possible to recoup a $7.5 billion investment if you don’t sell Elder Scrolls 6 on the PlayStation?” Kotaku’s editor-in-chief Stephen Totillo asked Spencer during the interview, who responds with “yes,” but then elaborated that Microsoft’s purchase of ZeniMax wasn’t solely to “take games away from another player base like that.”

Spencer then goes on to say the following:

“But I’ll also say in the model—I’m just answering directly the question that you had—when I think about where people are going to be playing and the number of devices that we had, and we have xCloud and PC and Game Pass and our console base, I don’t have to go ship those games on any other platform other than the platforms that we support in order to kind of make the deal work for us. Whatever that means.”

Reading between the lines, it seems like Microsoft hasn’t yet decided how it wants to move forward with the release of future ZeniMax titles. However, Spencer and Microsoft are considering making some future games from the publisher exclusive to the Xbox Series X and Series S.

With the Elder Scrolls 6 arguably being one of the publisher’s most anticipated titles, it would make sense for the game to be exclusive to Xbox consoles and PC to push Xbox Series X and S hardware sales.

For Kotaku’s full interview with Spencer, follow this link.

For more on the Xbox Series X, check out my in-depth preview of the consoles 120Hz titles, next-gen games and Storage Expansion Card.

The post Bethesda’s The Elder Scrolls 6 could be an Xbox and PC exclusive, according to Phil Spencer appeared first on MobileSyrup.