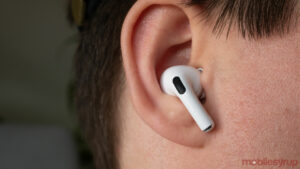 A few months after the feature’s announcement during the tech giant’s all-digital WWDC, Apple’s AirPods Pro have now been updated to include a new ‘Spatial Audio’ setting that works with 5.1, 7.1 and Dolby Atmos surround sound.

The new feature, which enables a surround sound-like effect with Apple’s high-end earbuds, is included in firmware ‘version 3A283’ that’s part of the latest iOS 14 public beta. While there’s no log for the update, AppleInsider says that the option now appears in the AirPods Pro Bluetooth settings. This feature is probably publicly releasing alongside iOS 14 on September 16th.

Though this form of soundscape isn’t ideal for listening to music, it could potentially be great for watching movies with the AirPods Pro. It’s likely Spatial Audio will eventually also work with the Apple TV, which would make sense given the device’s emphasis on video content.

At WWDC 2020 back in June, Apple showed off how Spatial Audio takes advantage of the earbuds’ accelerometer to track head movement. At the event, the tech giant also revealed a new feature that makes it easier to switch AirPods between Apple devices. This feature is set to launch alongside the public release of iOS 14, iPadOS 14 and macOS Big Sur.

AppleInsider says that this easy switching is included in the recent AirPods Pro update. An update to Apple’s 1st and 2nd-generation AirPods featuring the switching functionality is probably on the way as well.

My pair of AirPods Pro have not yet received the update, likely because my main iPhone isn’t running the iOS 14 beta.

AirPods updates can’t be downloaded manually and are installed automatically. To check what version of firmware your AirPods are running, navigate to ‘General, then ‘About,’ and, finally, select the wireless earbuds from the menu.