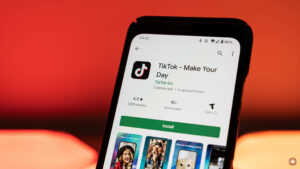 Update 08/01/2020 at 10:27am: TikTok owner ByteDance reportedly offered a new deal that would see it divest TikTok and forgo its minority stake in response to Trump’s threat to ban the app. Microsoft reportedly will take over U.S. operations and will be responsible for U.S. user data.

President Trump says he plans to ban China-based TikTok from operating in the U.S. as early as today.

“As far as TikTok is concerned, we’re banning them from the United States,” Trump told reporters aboard Air Force One on July 31st. Bloomberg reports Trump said he was ready to sign a document to order the ban as early as Saturday. The threat of a ban has loomed over TikTok since early July.

TikTok is a popular social network, especially among teens, that lets users record short videos and share them. The social media app’s roots trace back to Vine, one of the first to kick off short-form videos before Twitter shut it down.

If you find yourself wondering how TikTok and its short-form videos could be a threat to national security, you’re not alone. The app seems relatively innocent — at least, as far as social media apps go. Concerns stem from two main areas.

The first is the app’s privacy practices. Like most social media apps, TikTok collects user information from smartphones. However, some people are concerned over TikTok’s methods, which the app tries to obfuscate so it’s hard to tell what it’s collecting.

The second factor appears to be the app’s ownership. Beijing-based ByteDance owns TikTok, which itself brings more concerns. On the one hand, some worry that China can use ByteDance and TikTok to harvest data, particularly sensitive information such as military base locations. The other concern is TikTok’s algorithm, which controls what content appears in a user’s feed. Some worry China could influence the algorithm to promote propaganda.

How would a TikTok ban work?

Despite what Trump said, it remains unclear how the U.S. would go about a ban. One way the Trump administration could enforce a ban is through a network block. However, there’s no precedent for this in American law, so it seems unlikely this route would lead to an immediate ban.

The administration could try to force Apple and Google to remove TikTok from their app stores, but that also seems unlikely. Further, if that’s how it goes down, Android users might be able to sideload the app from outside the Play Store.

Another idea that the administration reportedly floated was forcing ByteDance to divest parts of TikTok — the company acquired American assets in 2017 it later merged into the app. Alternatively, the U.S. could add TikTok to an ‘entity list’ to prevent it from purchasing American products and services without a special license. The Trump administration did something similar to Huawei.

Interestingly, recent reports suggest TikTok was shopping around for an American investor to purchase it while leaving ByteDance a minority stake. Such a move could ease U.S. scrutiny. One company allegedly in talks to buy TikTok was Microsoft.

If the U.S. moved to ban TikTok, it remains unclear what impact it would have in Canada. It’s unlikely the app would stop working or would no longer be available in Canada, although the U.S. could pressure the federal government to enact a similar ban.

That said, a U.S. ban could hurt TikTok’s user base and reduce the amount of content. Several U.S. TikTokers could jump to similar platforms like Byte, and their followings may go with them.

Ultimately, TikTok in Canada could end up in a similar situation to Huawei. Huawei still sells products in Canada, but its new smartphones don’t run Android because of the U.S. ban. For the average user, that means Huawei phones don’t have easy access to apps and other services they likely use, and the experience of using a Huawei phone isn’t as good as before.

Source: Bloomberg Via: The Verge