Microsoft shutting down Cortana apps on iOS, Android in 2021 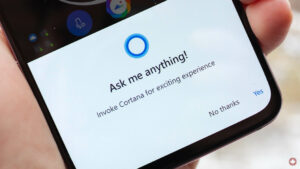 Microsoft will shut down its Cortana apps on iOS and Android, end support for the Harmon Kardon Invoke smart speaker and drop the Cortana functionality from the first-gen Surface Headphones starting 2021.

The news comes via a Microsoft Support page detailing the upcoming changes. As noted by The Verge, the impending end of Cortana marks another step in Microsoft’s plan to rework Cortana as a specialized productivity assistant instead of a Google Assistant or Amazon Alexa competitor.

Microsoft has already begun changes with Cortana on Windows 10 this year. The company has also given a September 7th date for the previously announced plan to sunset third-party Cortana skills for Windows.

The new focus for Cortana will be productivity features. Microsoft plans to repurpose the digital assistant as a part of its Microsoft 365 software suite. The company pointed to the integrated Cortana features in Outlook and Teams as examples of the new productivity-focused experiences.

While some may lament the loss of Cortana’s broad feature support, Microsoft hopes a narrow focus can help Cortana better complement existing software. Further, it could help it compete less directly with Google and Amazon, which largely dominate the smart speaker and digital assistant markets.

Source: Microsoft Via: The Verge

The post Microsoft shutting down Cortana apps on iOS, Android in 2021 appeared first on MobileSyrup.