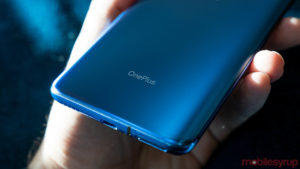 Yet another illustration of OnePlus’ rumoured upcoming true wireless earbuds, either called ‘Buds’ or ‘Pods,’ has leaked online.

Once again coming from Twitter leaker ‘Max J’ (@MaxJmb), this time around the illustration shows the rumoured OnePlus Buds in black. Previously, the illustrations showed a white colour.

Like Max J’s previous leaks, this illustration shows the OnePlus Buds with their charging case, also in the black colour. Interestingly, the leak shows the backside of the Buds for the first time. Previously, Max J’s images showed the earpiece, which looked very similar to Apple’s AirPods.

OnePlus Buds’ sport a similar design to the company’s other wireless earbuds, such as the recently launched Bullets Wireless Z. That means the familiar circle seen on other OnePlus earbuds is present, as well as a coloured ring around it — in the case of the black colour, a red ring, making for OnePlus’ trademark colours.

Unfortunately, outside of the illustration, Max J didn’t include much more information about the OnePlus Buds. Based on what Max J has shared before, OnePlus should unveil the Buds in July, possibly alongside the rumoured Nord smartphone. Unfortunately, the Nord likely won’t come to Canada.

It’s also worth noting that in June, XDA Developers pulled a bunch of code related to the OnePlus earbuds out of the Android 11 beta for the OnePlus 8. In the code, the earbuds were called ‘OnePlus Pods’ and indicated the earbuds would support several common wireless earbud features. That included double-tap to play music and support for Google’s ‘Find My Accessory’ feature.

While it remains unclear whether OnePlus will launch them earbuds under the ‘Pods’ or ‘Buds’ name, it seems likely the company will unveil its true wireless earbuds soon.