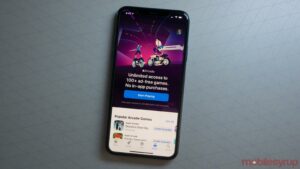 Apple is reportedly shifting its strategy surrounding Apple Arcade in an effort to retain more subscribers, according to a new report from Bloomberg.

The report goes on to state that Apple has cancelled several contracts for games that are still in development, and that an Apple Arcade creative producer told several developers that their upcoming titles don’t meet the tech giant’s “engagement” expectations.

Apple reportedly now wants Arcade to feature games that will keep users subscribed to the platform beyond Arcade’s free trial. This likely indicates that the service hasn’t yet met Apple’s expectations as far as maintaining subscribers beyond its one-month trial period.

Apple has reportedly spent between $1 million USD and $5 million USD on several Apple Arcade titles, and also set aside “tens of millions of dollars” to support the development of games for the platform. It’s unclear what specific metric for engagement Apple is using, but the story cites a recent call with Arcade developers mentioning Toronto-based Capybara Games puzzle title, Grindstone, as an example. Grindstone is a colour-matching action-oriented puzzle game that features several levels and relatively slow progression.

This shift in strategy has likely led to apprehension among developers that release their games on Apple Arcade, particularly amid the ongoing COVID-19 pandemic. It’s still unclear how developers are paid for titles featured in Apple Arcade, though Bloomberg’s report says that Apple pays studios to build games for the platform.

Apple Arcade still holds tremendous promise slightly over a year after its initial release because it’s an avenue for developers to move away from the often frustrating microtransactions that are rampant in the mobile gaming space. That said, it’s important to note that the platform isn’t open to all developers, which means that only a select few can benefit from the service’s monetization model.

Most Apple Arcade titles are available across iPhone, iPad, Apple TV and Mac. The service costs $5.99 per month and offers a free one-month trial.

You can read Bloomberg’s full story about Apple Arcade’s shift in strategy at this link.