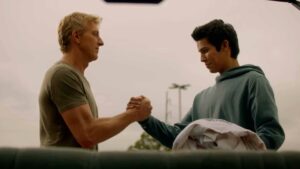 A new report states that YouTube is currently in talks with Hulu and Netflix to sell the third season of Cobra Kai.

The show focuses on the main characters from 1984’s Karate Kid as they live their lives in modern-day California. While it doesn’t exactly sound like the most refreshing idea, the show is terrific and has a 94 percent rating on Rotten Tomatoes.

The first two seasons of the show were branded as YouTube Originals, so you needed to subscribe to YouTube Premium to watch them. The second season reportedly performed well for the service, according to Deadline, which is why Google renewed the show for a third season.

On May 28th, the company announced that it wasn’t renewing the show for a fourth season. Now it’s coming out that the company is shopping season three around to other networks.

The report mentions Hulu and Netflix by name, but it all seems up in the air still. While Hulu isn’t available in Canada, Bell’s Crave service licenses several of the platform’s shows, so it’s possible that it could come here through that. Alternatively, it may even come to Prime Video Canada. For example, Hulu’s Little Fires Everywhere — starring Reese Witherspoon and Kerry Washington — came to Amazon Prime Video in Canada last week.

The report also mentions whoever gets season three will also get the back catalogue of season one and two. There is a lot of hope for the show to be purchased, especially since it’s completed and ready to ship, compared to many other new shows that needed to halt filming due to the COVID-19 pandemic.