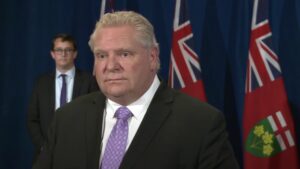 “It’s so important to have the proper app make sure we do contact tracing and tracking, when people start flying from Vancouver to Toronto to out east, those apps have to be able to talk to each other,” he said during a daily briefing on May 22nd.

This announcement comes a few hours after Prime Minister Justin Trudeau announced that the government has been working with several partners, including Apple and Google, to create a COVID-19 contact tracing app.

Trudeau noted that Apple and Google’s notification system would be important as a base for an app. He went on to state that the government “will be able to recommend strongly to Canadians a particular app that will help us manage the spread of COVID-19.”

As of now, most provinces have been conducting manual contact tracing, which involves public health employees and city staff contacting infected people and then calling each person they came into contact with.

Alberta is the only province to officially launch an app dedicated to preventing the spread of COVID-19 through digital contact tracing.

The federal government has noted that more information regarding an official COVID-19 contact tracing app will be provided in the coming weeks.