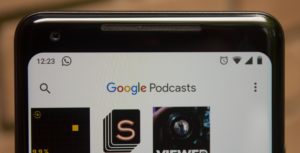 The Google Podcasts app on iOS has received CarPlay support.

This comes as part of version 2.0 of the Google Podcasts iOS app. According to Google, this support has been added to allow you to “more easily and safely listen while you drive.”

On the vehicle end, the app has a simple interface with three tabs: ‘Home,’ ‘Explore’ and ‘Activity.’

The post Google Podcasts on iOS gets CarPlay support appeared first on MobileSyrup.