Samsung and LG might be working on portable monitors for smartphones 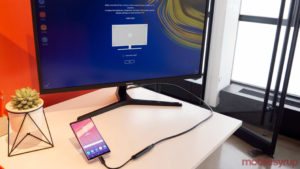 A new report indicates that Samsung and LG are working on battery-powered external monitors designed to be used with smartphones.

The rumours, which stem from South Korean publication ETNews, indicate that the companies are still in the concept stage and in the process of analyzing market demand for external screens designed for smartphones.

It’s likely that at least in Samsung’s case, the external display will be somehow connected to DeX, the company’s smartphone-desktop operating system. While DeX is a passable platform, it still lacks widespread full-screen app support, making it difficult to use depending on your workflow.

According to the rumours, the displays will reportedly measure in at 14.1-inches and will feature a full HD resolution. Samsung’s screen, which is tipped to weigh in at a little under 1kg and feature a 10,000mAh battery, is rumoured to be called the ‘Dexbook.’

On the other hand, LG’s screen will reportedly feature a 5,000mAh battery that brings its weight down to 600g. LG doesn’t currently offer a desktop mode with its devices, but likely plans to in the future if it’s working on an external display for smartphones. It’s also worth noting that Android 10 features a very limited desktop mode hidden in its Developer Options settings.

It’s worth pointing out that portable, battery-powered displays aren’t exactly new. The MobileSyrup team has several displays from Chinese manufacturers floating around the office, but all suffer from issues, including poor display quality and battery life.

It’s possible that Samsung and LG could solve these build-quality issues given the companies are far more reputable. I still question the overall utility of a portable screen, especially if it’s designed to work with a smartphone. Along with the portable screen, you’d also need a Bluetooth mouse and keyboard to really take advantage of the additional screen real-estate.

The post Samsung and LG might be working on portable monitors for smartphones appeared first on MobileSyrup.