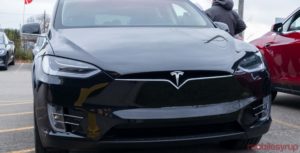 Elon Musk has teased a video of a Tesla that’s reading messages to people as it rolls by.

What’s unclear is if these are pre-recorded messages, or if you’ll be able to talk through a microphone inside the car and have your message relayed via the vehicle’s external speakers.

In the video, it looks like the car is yelling out a pre-canned response, so it’s likely that this will be what drivers can look forward to.

Teslas will soon talk to people if you want. This is real. pic.twitter.com/8AJdERX5qa

In the future, it will be interesting to see what other voices and responses the Tesla team adds to its cars.

For example, some kind of backup warning and other safety features could be added to help keep pedestrians aware of the moving car.

The post Tesla’s cars to add ability to talk to people via external speakers appeared first on MobileSyrup.