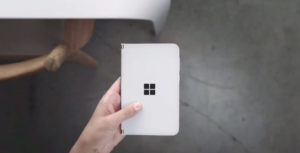 Microsoft’s CEO, Satya Nadella, was seen using the upcoming Surface Duo smartphone that the company announced in October of 2019.

The Surface Duo is Microsoft’s super slick looking dual-screen Android smartphone that runs a skinned version of the OS that fits more in line with Window’s design.

In the photo, Nadella is seen talking to the editor of Yahoo Finance, Brian Sozzi. There isn’t much to be seen in the video, but it looks incredibly thin and it’s nice to see the CEO using a working version.