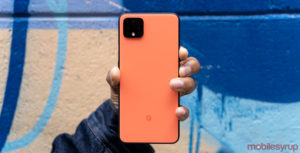 Rumours about Google’s reported ‘Fast Share’ feature — seemingly similar to Apple’s AirDrop — have circulated for some time. Now it looks like Google has renamed the feature to ‘Nearby Sharing.’

According to XDA Developers, Google Play Services version 20.1.03 brought the change to Fast Share, along with some other details. To be clear, Google has not officially announced or released the feature, but XDA has been able to dig into Play Services and activate it.

Along with the new Nearby Sharing name, new details indicate that to use the feature, devices need to be within one foot (or about 30cm) of each other. That comes from text that appears towards the bottom of the Nearby Sharing share sheet.

According to previously uncovered details, Nearby Sharing uses Bluetooth to initiate a handshake between devices, then uses a direct Wi-Fi connection to transfer the files.

Apple’s AirDrop feature on iOS devices works very similarly, using Bluetooth to connect nearby devices and establish a Wi-Fi connection to send files over. It’s quite effective and has proved a massively popular feature. Android has lacked a direct device-to-device sharing feature of that nature. Previously, Android users could quickly share small files using NFC, but it required users to bring devices quite close together and file sizes were very restricted.

However, Google killed the NFC-based Android Beam feature in Android 10. Nearby Sharing will hopefully replace it soon, but it’s not clear if or when Google will announce the feature. Considering the recent rebrand, it’s possible Nearby Sharing could be nearing an official launch date.