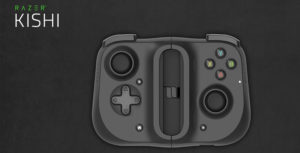 Razer, known for its various gaming accessories, has released another mobile controller called the Kishi that straddles the line between unique and uninspiring.

What’s interesting about the Kishi is that the controller wraps around the phone like a case rather than a more traditional mount like the Rotor Riot.

The overall design expands on the Junglecat, which takes inspiration from the Nintendo Switch’s snap-on Joy-Con controllers.

Unlike the Junglecat, the Kishi can be used on both iPhone and Android devices by connecting via a USB-C or Lightning cable.

The two analogue sticks are adjacent to one another, with the left side featuring a directional pad and the right side having buttons. As with most joypads, the shoulder triggers are also located at the top. Users can map controls to the joysticks since it features additional clickable inputs.

The Razer Kishi has improved portability, as it easily folds, making it easier to carry around. The gamepad also features pass-through ports that allow other devices to be charged while you’re playing.

Razer hasn’t confirmed a final price, but the product is due to launch later this year.

If you are interested in a mobile gamepad, MobileSyrup reviewed the Rotor Riot controller, which also works for both iPhone and Android.