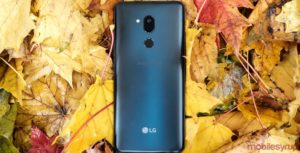 Rogers has confirmed that it Android 10 is coming to its LG G7 One “soon.”

The news comes by way of a recent update that the carrier made to its ‘OS upgrade schedule’ chart in its forums.

A more specific rollout window was not mentioned, but this seems to suggest that the update is coming by the end of the year.

The LG G7 One launched in Canada last October. More information on the phone can be found here.

The post Rogers says LG G7 One is getting its Android 10 update ‘soon’ appeared first on MobileSyrup.