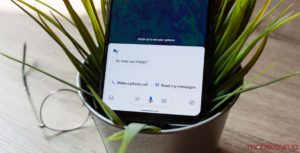 Google is back at it, allowing kids to ask the Assistant precisely what’s going on at the North Pole.

Every day over the next three weeks, you can learn what’s going by saying “Hey Google, what’s new at the North Pole?”

Additionally, Santa’s Village received a makeover this year. Head to the website to check out the reindeer gym, and take a look at the new toy factory and greenhouse. There are more than 24 games and an original 3D snow box allowing kids to build their very own winter scene.

With Google Earth, kids can once again test their knowledge of holiday traditions around the world and see the treats people eat in various countries at this time of year.

You can also Image Search (that works best and mobile) and use Tenor to look for the best Santa Tacker GIFs.

And don’t forget to tell your to have your kids ask the Assistant, “Hey Google, give me a Santa joke,” though personally, the jokes aren’t all that funny.