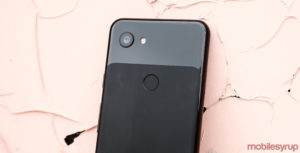 Google is launching the December security patch to a variety of handsets. The company is rolling out the factory/OTA images, which include fixes to bugs and security vulnerabilities.

According to the patch notes, the Pixel 2 series, 3 series, 3a series and 4 series will get fixes for vulnerabilities that range from moderate to critical.

Surprisingly, the update is delayed for the Pixel 4 and 4 XL handsets.

Here are some of the fixes rolling out.

The updates also include fixes and improvements to performance, stability, camera, display and face unlock.

The Pixel 3a and the Pixel 3a XL also get the Live Caption functionality available on the Pixel 4 series, which transcribes audio and displays captions so users can read along.

In an odd turn of events, we at MobileSyrup still haven’t received the November updates for our Pixel 4 devices. Let us know in the comments below if you’ve got the November security updates.