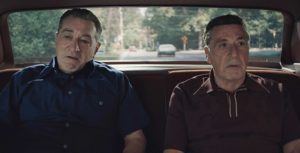 Every week, MobileSyrup goes over some of the most notable movies and TV shows to recently hit Canadian streaming platforms.

This column typically focuses on content from Amazon Prime Video Canada, Crave and Netflix Canada, with other streaming services mentioned when relevant. For example, a new Apple TV+ series debuted this week and will be listed below.

This column will also highlight shows or movies that are made in Canada, involve notable Canadian cast or crew and/or are filmed in Canada.

Based on a true story, The Report follows U.S. Senate investigator Daniel J. Jones as he digs into the CIA’s use of torture following the 9/11 terrorist attacks.

Amazon Prime Video is included at no additional cost with an Amazon Prime subscription, which is priced at $79 CAD/year in Canada.

Dorothy and Sean Turner hire a young nanny to look after their newborn child, which leads to a mysterious force entering their home.

A bunch of Christmas movies and specials

December 1st sees a variety of classic and modern Christmas-themed content hit Crave. Far be it from me to tell you which of these to watch — although Die Hard has been on Crave for a while and is the definitive best Christmas movie — so here’s a list of a few of Crave’s Christmas films and specials:

Dark Side of the Ring [Crave Original]

This Crave Original docuseries examines how wrestlers must balance their in-ring characters with who they really are, as well as the darker side of the wrestling industry.

Stream Dark Side of the Ring here.

A standard Crave subscription costs $9.99/month, with Starz costing another $5.99/month and HBO an additional $9.99/month.

The full list of movies and shows that hit Crave this month can be found here. A roundup of Crave’s new December content, meanwhile, is available here.

This docuseries shows how negligent and deceitful production and marketing of popular consumer can wind up hurting people.

Based on the 2004 book I Heard You Paint Houses by Charles Brandt, The Irishman follows truck driver Frank Sheeran as he becomes a hitman and gets involved with the mob.

The Irishman was directed Oscar-winning filmmaker Martin Scorsese (The Departed) and stars Robert DeNiro (Taxi Driver), Al Pacino (Scarface) and Joe Pesci (Goodfellas). Notably, the film has a reported budget of nearly $160 million USD (about $212 million CAD), making it one of Netflix’s most expensive projects to date. Part of that is due to advanced de-aging technology that is used on DeNiro in certain scenes of the film.

During a 10-day Christmas visit to Philadelphia, a struggling musician tries to win over his new girlfriend’s eclectic family.

The Movies That Made Us [Netflix Original]

This docuseries takes a look at four popular movies — Die Hard, Dirty Dancing, Ghostbusters and Home Alone — from the perspective of the actors and directors who created them.

Stream The Movies That Made Us here.

What are you planning to streaming this weekend? Let us know in the comments!