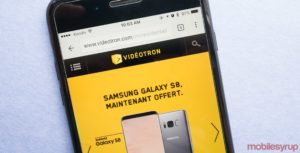 In its earnings report released on November 7th, the Quebec regional carrier said this was a 36.9 percent increase when compared with the same period a year ago.

“Vidéotron’s robust business model and its ability to generate organic growth held strong, as reflected by the 168,000 increase in connections to the mobile telephony service during the 12-month period ended September 30, 2019, the largest increase in the number of connections since our mobile network launched in 2010,” said Jean-François Pruneau, CEO of Vidéotron in the earnings report.

“During the quarter, we once again demonstrated our ability to stay at the leading edge of evolving consumer needs and maintain our position as a leader in innovation and customer experience.

It said its total revenue from its wireless services was $17.4 million CAD.

Vidéotron stated that its mobile Average Billing Per User (ABPU) for the quarter was $53.28, a slight decrease of 1.8 percent compared to the $54.28 that was reported in the same period a year ago. The carrier says this downturn was “due in part to the popularity of bring your own device plans.”

In the quarter, total revenue was $1.07 billion, an increase of 1.9 percent from the same period a year ago.