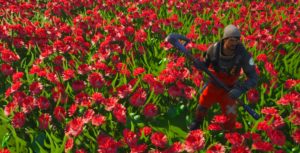 The Royal Canadian Legion has partnered with Epic Games to bring a custom Remembrance Day-themed island to Fortnite.

Unlike a traditional Fortnite match, which sees 100 players face off in a battle royale, Remembrance Island will have combat turned off. That way, players can fully immerse themselves in the island’s 30 museum-like installations. To help guide them, a trail of poppies will be set up across the island.

Additionally, the Legion encourages players to gather around the cenotaph at 11pm ET on November 11th to have their own moment of silence, then share images or streams of the island using the hashtag #SaluteThePoppy.

Remembrance Island can be accessed for free in Fortnite’s Creative Mode using the island code 5053-3302-4847.

The island was conceived by Canadian agency Wunderman Thompson and built with the help of Fortnite creative builder JXDVN. Both parties worked free of charge with the Legion to bring the island to life.

Outside of the Fortnite experience, Canadians can support the Legion by visiting its website or purchasing a poppy in various malls, grocery stores, banks across Canada. Additionally, the digital poppy that launched in 2018 is back this year. After donating, Canadians can create their own unique poppy and leave a message of dedication to someone who served. The poppy can then be saved and shared online.

As with in-person donations, proceeds of the digital poppy sales will go towards supporting veterans and their dependents.