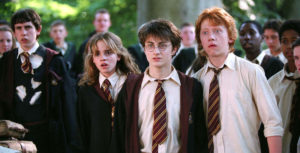 The RPG is available for pre-registration on iOS and Android devices in China, but it’s unclear if it’s coming to the West.

Here are some additional promotional materials for the game.

Players will be a wizard and explore hogwarts, learn spells and magic, master the world of magic. pic.twitter.com/Ea8nbHuHZM

In the game you play a student at Hogwarts after the Second Wizarding War. The player learns new spells, makes new friends, and designs spell combinations. There also seems to be a quick-time mini-game of some sort.