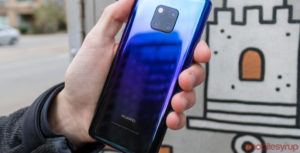 Huawei’s Mate 20 Pro flagship from last November is starting to get EMUI 10, which is based on Android 10.

According to an EMUI roadmap that Huawei released in mid-August, the Mate 20 series was slated to get an EMUI 10 beta in late September. Now that we’re in October, it makes sense that the stable build of the OS is rolling out.

Only a few users around the world are starting to report the update appearing on their devices, according to Android Central. Although, if it’s rolling out to some users, it stands to reason that the stable build is done, so it’s only a matter of time before every Mate 20 and Mate 20 Pro user gets the new OS.

Huawei recently launched the Mate 30 series, but it doesn’t appear to be launching in Canada, and if it is, it doesn’t have Google’s services like the Play Store or Gmail.

Thus, making the Mate 20 or a P30 series a better buy for Canadians since it’s still a great phone and now seems very close to receiving the latest and greatest version of Android. The P30 is the other Huawei phone that’s gotten the update in some places, but it hasn’t rolled out to Canadian users yet either.

Android Authority also mentions that the Android September security update is rolling out with the update. The update is slated to be 4.4GB and has the build number 10.0.0.136.

The post Huawei starting to roll out Android 10 to the Mate 20 Pro appeared first on MobileSyrup.