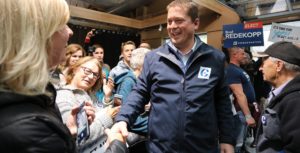 Right off the top, Scheer states that his plan would have large technology companies pay a tax.

“In line with similar taxes in Europe, we will apply a three percent tax on revenues of businesses that provide a social media platform, search engine, or an online marketplace to Canadians,” the platform reads.

This tax would only apply to large companies with revenues of more than $1 billion and revenue in Canada of more than $50 million.

“Ultimately our goal is to encourage companies to set up a corporate headquarters in Canada,” the platform reads. “This off-ramp will encourage them to do so.”

“It’s time to review the tax system and increasing the amount of financial exchanges or transactions are on digital platforms and there are inequalities in our country,” Scheer said during a press conference in British Columbia. “Our party will look at that. Today we are talking about taxing web giants to make sure they will pay their fair share…”

Where it differs is that the Liberals’ plan is a temporary measure that would be reworked after the international community reaches an agreement regarding how governments tax internet companies.

Incumbent Prime Minister Justin Trudeau also indicated in his plan that tech giants in Canada must be generating $40 billion in revenue to be taxed.

According to Scheer’s platform, if he were elected Canada’s next prime minister, he would ensure Canadians have access to high speed internet.

“Ensuring that public resources like wireless spectrum are prioritized for Canadians living in rural and remote areas will help achieve that,” the platform reads.

“We will also redirect existing rural broadband funding toward strategic priorities, such as high-capacity backbone where there is no incentive for the private sector to fund telecommunications infrastructure.”

Scheer’s platform also indicates that spectrum licence areas will be redefined “for internet providers” so that rural Canadians are “not unfairly lumped in with urban centres in spectrum auctions.”

The Liberals also announced the idea to ensure that spectrum is distributed fairly to increase competition. According to the Liberal platform, during auctions, there would be reserved space for new entrants.

Regarding this, the Liberals also tackled rural broadband internet services heavily before the election was called. Incumbent Rural Economic Development Minister Bernadette Jordan unveiled her Connectivity Strategy detailing how the party would connect 100 percent of Canadians to high-speed internet by 2030.

Scheer also details several points concerning how he intends to protect the privacy of individuals online.

“To safeguard the data and privacy of Canadians, we will require companies to get consent to collect data through plain language agreements,” the platform reads. “Only data that is necessary to provide the service can be collected.”

The platform indicates that it will create better regulatory standards “for ethical and secure use of artificial intelligence and the Internet of Things.”

This includes creating “sensible regulation, rigorous standards, and strong oversight over the personal information, data, and privacy of Canadians.”

Along with creating better online privacy regulations, Scheer’s platform intends to also educate tech consumers on how to better protect themselves.

The platform indicates that it will “establish a standard and educate Canadians about the security features of their devices, applications, and appliances.”

The party is calling this the Canada Cyber Safe Brand.

“This will empower consumers to make educated choices about the devices they purchase,” the document reads.

Protecting Canadians for Scheer also means introducing what he would do to prevent data breaches from taking place.

This topic has been heavily discussed after major breaches took place this summer with Capital One and Desjardins.

The platform reads that to protect Canadians on this front, the party will work with partners to “establish binding cyber security standards for critical infrastructure sectors and penalties for non-compliance.”

This also includes creating a Cabinet committee on cybersecurity and data privacy.

“As holders of some of Canadians’ most sensitive information, the government must abide by the highest possible standards for cyber security. We will run regular cyber security penetration tests on all government departments and establish industry standards performance benchmarks for senior public servants,” the platform reads.

The platform did not include any information or details regarding telecom affordability.

Unlike Scheer, the Liberals and the New Democrat Party have formally introduced ways in which their party would protect Canadians from high cellphone or internet bills.