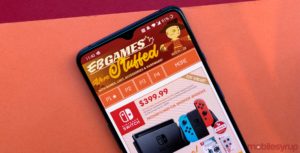 Thanksgiving is right around the corner and retailers in Canada are starting to send out flyers packed with deals to celebrate the holiday.

EB Games has published its flyer online, and there are some decent deals on Red Dead Redemption 2, NHL 20 and more.

Other highlights include $15 off Xbox One Wireless controllers and 30 percent extra trade-in credit when you trade in a used game towards anything in the flyer.

The deals begin this Friday on October 11th and will be on until the 20th.

Other notable deals include: