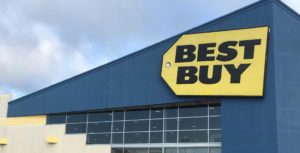 Best Buy Canada has shared a sneak peak of its ‘Anniversary’ sale on its website. The sale offers discounts on a variety of products, including laptops, tablets, TVs, cameras, smartphones, video games and more.

The sale runs from October 11th and ends on the 17th.

Below we’ve listed some of the more notable products. However, here’s also a link to the full flyer.

Check out some of the notable devices below: