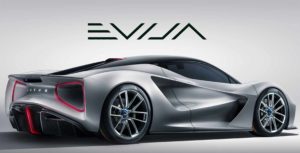 On July 16th, the British automotive marque just revealed Evija (Evv-eye-ah), a 1,973 (2,000 PS) horsepower fully electric hypercar that brings the fight to the Rimac C Two (1,914hp), the Pininfarina Battista(1,900hp), and the 2020 Tesla Roadster that could have rocket thrusters.

Aside from its striking resemblance to an alien spaceship, the motorsport-inspired, Alcantara/leather-laden cockpit gives you a square steering wheel with buttons and knobs for different drive modes (Range, City, Tour, Sport and Track) and other functions. The speedometer is fully digital, and the centre console has touch-sensitive buttons with haptic feedback to minimize chances of distracted driving. Of course, Lotus throws in ambient lighting for a bit of extra flair.

Speaking of battery life, the Evija can recharge from zero to 100 percent in just 18 minutes using a 350kW charger. An 800kW charger could finish the job in nine. The range is 270 miles or 434 km.

Here is the walkthrough video for more in-depth information.